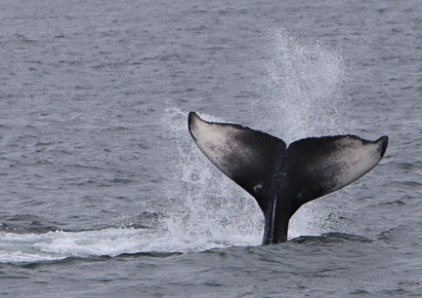 Here’s another big event we missed while in Glacier Bay this summer: Flame is a mother again! Earlier this year we made a couple of posts about one of our favorite local whales, a female nicknamed Flame. We had observed Flame on January 1, and then a friend filmed her in March. The two dates were so close that we thought she had stayed the winter in Southeast Alaska.

Well… maybe. But turns out the saga had just begun. This summer, Flame was sighted in the Juneau area again–but this time she wasn’t alone. She had a new calf.

So. There are a few possibilities:

In any case, it appears Flame stayed well into winter, feeding, while she was pregnant.

This is Flame’s second calf in two years. We nicknamed the first one Spark; we think Ember would be a good name for this new one. Interestingly, both calves have been quite precocious, lifting their flukes high in the air when diving or playing… an unusual behavior for young calves. In 2011, Cheryl even watched Flame apparently teaching Spark to lift its flukes when diving.

The photo above is of Ember’s lovely little (8-foot-wide) flukes. It was taken by photographer Barbara Gillespie. You can see more of Barbara’s photos of Ember, and lots more, at her website. Thanks, Barbara, for sharing this photo!